Basketball is a master American game that was designed in 1891 by Dr. James Naismith. While originating the game, Naismith focused on making a non-contact game to be played inside a building. He created the rules to play the game. These were published in the school newspaper of Springfield College – The Triangle, in January 1892.

When the game was invented in Springfield. The only goal was to train young athletes in cold months when they could not play outside. In the beginning, they played the game with a small ball like a soccer ball. Players hung two baskets to the railing of the balcony for makeshift hoops purposes. So what are the 13 original rules of basketball?

The 13 Original Rules of Basketball by James Naismith

Basketball rules are the principles that govern the frisk, equipment, process and officiating of basketball. Many of the primary rules are uniform in the whole world; variations may exist. The following list presents the 13 original rules of basketball set by Naismith. Updated rules are also added so you can know what variations have been added to them over time.

The player can throw the ball in any direction with his one or both hands.

This way, the players can get closer to the basketball without passing it to the other player, also called “dribbling.” Naismith’s first set of rules doesn’t contain dribbling, which in today’s game is allowed.

Updated rule: The rule is the same except that when a team has taken the ball over that line, they are not permitted to pass it back over the midcourt line.

The ball can be batted in any direction with one or both hands (hitting with the fist is not allowed).

On defense, a player can hit the ball in any direction, and on the offensive end, in loose ball situations, the player can bat the ball to the other team member. Only the fists and feet can’t be used to deflect the ball.

Updated rule: The rule is still the same for the game.

Running with the ball

No player is allowed to run with the ball. They must throw it from the point on which it stops rolling. Allowance should be made for a player who finds the ball running at a good speed if he attempts to stop it.

Traveling/ running with the ball was considered as breaking the rule. When a player caught the ball, they had to stay in the same destination that the ball reached. The same rule applies to the sport of handball. The officiating umpires permitted little steps after the ball was reached if they found out the player was running really fast.

Updated rule: Players can pass the ball with one hand while running or passing. But they are not allowed to run with the ball while catching a dribble.

The ball must be held in or between the hands; the arms or body must not be used for holding it.

A player can hold the ball in his hands only. The use of arms to keep the defender from stealing the ball was forbidden. This rule is integral to the way the sport is played today.

No player can shoulder, hold, trip, push or strike the opponent in any way; the first violation of this rule by any player will be considered as a foul, the second attempt of these violations will disqualify the player until the next goal is made, if the player was found injuring the opponent intently, for the whole of the game, no alternative will be allowed.

Striking, tripping, pushing, holding, and shouldering are listed as foul acts. The first time when the rules are broken, it would result in notifying the player of a foul act. After the second attempt of the foul, the player cannot be in the game until the next goal is scored.

If the player is guilty of injuring the opponent intentionally, he will be expelled from the remaining game. This will disadvantage the team as no substitution is allowed after someone is ejected from the game. This rule was taken from the yellow and red card rules of soccer, which are heralds for violation in today’s game.

Updated rule: The mentioned acts are violations. A player should be disqualified with 5-6 fouls or get a suspension or ejection with a flagrant violation.

Striking the ball with a clenched fist is also a violation of rules 3 and 4 and rule 5.

No player can strike the ball with his fist as it will be considered a violation of the game.

Updated rule: The rule is still the same for the basketball sport today.

If any of the two teams makes three consecutive violations, it will be counted as a goal for the other team. Consecutive means that the opponent team has not made any foul in between.

Three consecutive violations committed by any team without the opponent team committing a foul within that duration would be count as one goal for the opponent team. This rule was a herald to the bonus and double bonus rule.

Updated rule: rather than making an automatic goal, five to six violations from any team result in awarding free throw attempts to the opponent team.

A goal shall be made when a player throws the ball or bats it from the grounds into the basket, and the ball stays there if the team defending the goal has not disturbed the goal or defended it. If the ball stays on the edges and a player from the opponent team moves the basket, one goal would be counted for the team.

Updated rule: This rule doesn’t apply in those basketball games where a net and hoop are used instead of an original basket. It has developed into defense pass interference and goaltending rules, including that the opposing team cannot touch the hoop after the ball has been hit.

When the ball goes out of the boundaries, the first person who touches it can only throw it into the field of play. In case of disputes, the umpire should throw it directly into the field. The thrower-in has 5 seconds to bat the ball; if he persists, the opportunity will move to the opponent. If any team holds it longer or delays the game, the umpire will give a foul call to that side.

Updated rule: The ball is thrown back into the field by a player from the opposing team who last hit it before it went out. The five-second rule is still the same, and any delay in the game is called a technical foul by the referee.

It is the umpire’s responsibility to judge the acts of men and note the fouls and notify the referee when the three consecutive fouls have been made. The umpire can disqualify a team member according to rule 5.

Updated rule: in NBA basketball, they have three referees in the game.

Out of the boundary rule 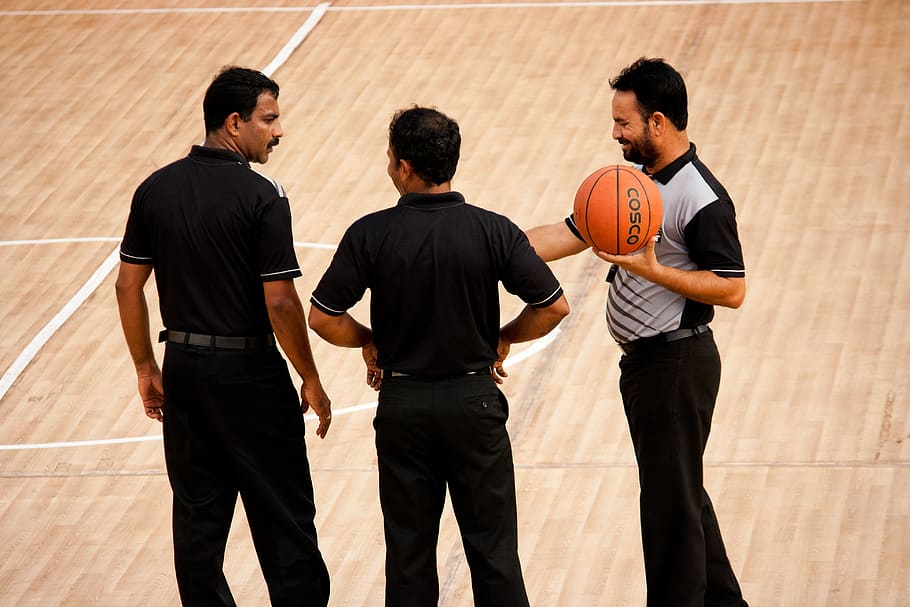 The referee is responsible for judging the ball and decide when the ball is in the playfield or the bounds. He should note the time and to which side the ball belongs. He must know when the goal has been made and count the goals and the other duties assigned to a referee.

Updated rule: the referee decides the ball possession, and the scorekeeper and timekeepers handle some other tasks.

The time of the game should be two halves, each of 15 minutes with a 5-minute break between.

The 5-minute break serves as half-time. The clocks are set for the game nowadays, and the games are usually longer than 15 minutes in nearly every match.

Updated rule: this differs by the level of the play, like collegiate formats versus high school. For the basketball game in NBA, four quarters each of 12 minutes are set with a 15 minutes rest between.

Game length extension for a draw

The team making the most goals will be declared as the winner. When a match is drawn, the game might be continued by the captains’ agreement until one of the team makes another goal.

Updated rule: The rule still applies the same. In case of a draw, the team plays another period.

Were The Rules Successful?

Naismith developed these 13 original rules of basketball to make the game fair, organized, and well-structured. Most of the rules still apply the same way they were created with some slight amendments as you’ve probably noticed when watching a game. These rules acted as a great framework for the monstrous sport basketball was to become!

It’s crazy to think that one individual invented these rules all so many years ago for a sport that’d end up taking the world by storm and becoming one of the greatest sports in the world.

The owner of this website, flexactivesports.com, is a participant in the Amazon Services LLC Associates Program, an affiliate advertising program designed to provide a means for sites to earn advertising fees by advertising and linking flexactivesports.com Review to Amazon properties including, but not limited to, amazon.com This occurs at no extra cost to you, and we appreciate your support.